This was another great year for conspiracy believers. The most popular conspiracy theory concerning the Ebola virus was that it was developed in a US laboratory as a bioweapon against the population explosion in Africa. When rapper Chris Brown tweeted to his 13 million followers: "I don't know..but I think this Ebola epidemic is a form of population control" it went viral. There were also conspiracy theories abound regarding the fates of Malaysian Airlines flights MH17 and MH370. Some even suggested these incidents involved the same aircraft.

When do we speak of a conspiracy theory, why are they so popular, and how can we resist them? According to Harvard Law professor Cass Sunstein, a conspiracy theory involves an event that is perceived as threatening — such as a mysterious disease, a terrorist attack, or the unexplained death of a high status figure — which is attributed to a secret conspiracy of individuals trying to achieve their goals through illegitimate means. Take for instance the death of Lady Di in 1997. According to a recent poll, conducted by YouGov UK, 38% of the British population still believe that her death was not accidental. The most popular conspiracy theory is that the car in which she was riding in Paris was sabotaged by the British Security Service on behalf of the royal family because of her affair with the Muslim playboy Dodi Fayed, son of the former Harrods and Fulham football club owner, Mohamed Fayed.

How can we explain the popularity and persistence of conspiracy thinking using an evolutionary perspective? The main cause lies in the way the human brain has evolved. In the multitude of data that reach us every day through our senses, our brains are constantly selecting, filtering, and organizing information. An important function of our mind is pattern recognition. Can we detect a pattern in the vast amount of stimuli that come to us from the environment? The evolutionary function of pattern recognition is evident. If it rained for a few days in a row then our ancestors knew that the rain-period had arrived, and so it was time was to move on. Or if our ancestors came across strangers on different hunting expeditions then you could surmise that a new tribe had settled in their territory.

The human urge for recognizing patterns is very strong. Psychologist Thomas Gilovich showed participants a series of two letters, e.g. OXOOOXXOXXOOXOO. Did they recognize a pattern? Most people did until Gilovich explained that the series was created by chance by throwing a coin (with an X for heads and 0 for tails). The same sensitivity to patterns explains why we recognize animals in the clouds or saints or pop stars in rocks and boulders. Diane Duyser took a bite from her sandwich one day and saw the image of Virgin Mary in what was left. She sold the sandwich on eBay for a whopping 28,000 dollar!

Another evolved function of the mind is to respond swiftly to threats. The biggest threat facing humans throughout history has been other people, particularly when they teamed up against you. If you consider societies that still live as in ancestral times, such as the Yanomamo in the Amazon region or the Kung San in Botswana then the most common form of violence involves a conspiracy directed against a particular individual who has been accused of malice, adultery, or witchcraft.

So we have evolved to be hypersensitive to conspiracy threats especially when we are anxious. A recent study by my colleagues Jan Willem van Prooijen and Eric van Dijk found that when student participants read an article about an African leader who was involved in a car accident they were more inclined to believe in a conspiracy when he died than when he was wounded. Other research from the University of Amsterdam found that people tended to believe more strongly in conspiracies when they were uncertain. Participants were asked to write about a subject that they either had a clear position on or were ambivalent about. Then they responded to a scenario in which they missed out on a promotion at work. The day before they received the news they noticed that their boss was exchanging a lot of emails with a colleague sitting next to them. Did participants think that their failed promotion had something to do with those emails? People who were induced to feel ambivalent believed more strongly in a conspiracy.
article continues after advertisement

There are also individual differences in conspiracy beliefs. A family member sends me regular links to web articles on all sorts of conspiracies such as (a) evidence for the existence of UFOs, (b) adding chemicals to drinking water to poison the population, (c) the alleged responsibility of the US government for 9/11. (Interestingly, almost 30% of Americans still believe in such a conspiracy). My relative has a high degree of openness to all that is new and strange, which is no surprise because he is an artist. Another personality factor predicting belief in conspiracy theories is how friendly you are. The less friendly the more you believe in conspiracies. From an evolutionary perspective this may be a highly functional adaptation!

A finally factor determining conspiracy thinking is power. On the one hand, if you feel powerless you are more inclined to believe that they are conspiring against you. On the other hand, people are also more likely to believe in conspiracies when their power base is being threatened. A dictator wields absolute power but obviously does not want to lose it. So some degree of paranoia — which is a component of conspiracy thinking — is not misplaced. We know from dictators around the world such as Hitler, Stalin, Mao and Kim Il Sung that they were extremely suspicious about conspiracies. Hitler, for instance, had women locked up who wrote them love letters for fear that they were out to do something to him.

So what should we do with this wisdom about conspiracy thinking given that it is probably hardwired? The first lesson is that you should operate as a scientist and always carefully consider the evidence for any conspiracy theory (which often turns out to be flimsy). When you do so you find that there really is something like climate change, and that it is not a conspiracy against the oil or car industry. And the burden of proof in the downing of MH17 points clearly in the direction of the pro-Russian rebels in the eastern Ukraine whatever the Russian media might otherwise suggest.

The second remedy for conspiracy thinking is to realize that there is really such a thing as a coincidence or a stroke of bad luck. If you think logically there is no design behind that cloud looking like an elephant or a tortilla with an image of Jesus. And whatever Oliver Stone and other filmmakers want you to believe, JFK was probably killed by a madman rather than a complex conspiracy involving the FBI, CIA and Lyndon B. Johnson.

To edit a famous saying: Just because you're paranoid doesn't mean they're after you.

It seems like once you decide to go down the conspiracy theory rabbit hole, it is becomes hard to come out. The more you read and study such things, the deeper it becomes ingrained.
Some people become quite fanatical.
This is not to say that, there may be some truth buried beneath the lie.

We have a test:  https://www.idrlabs.com/conspiracy/test.php 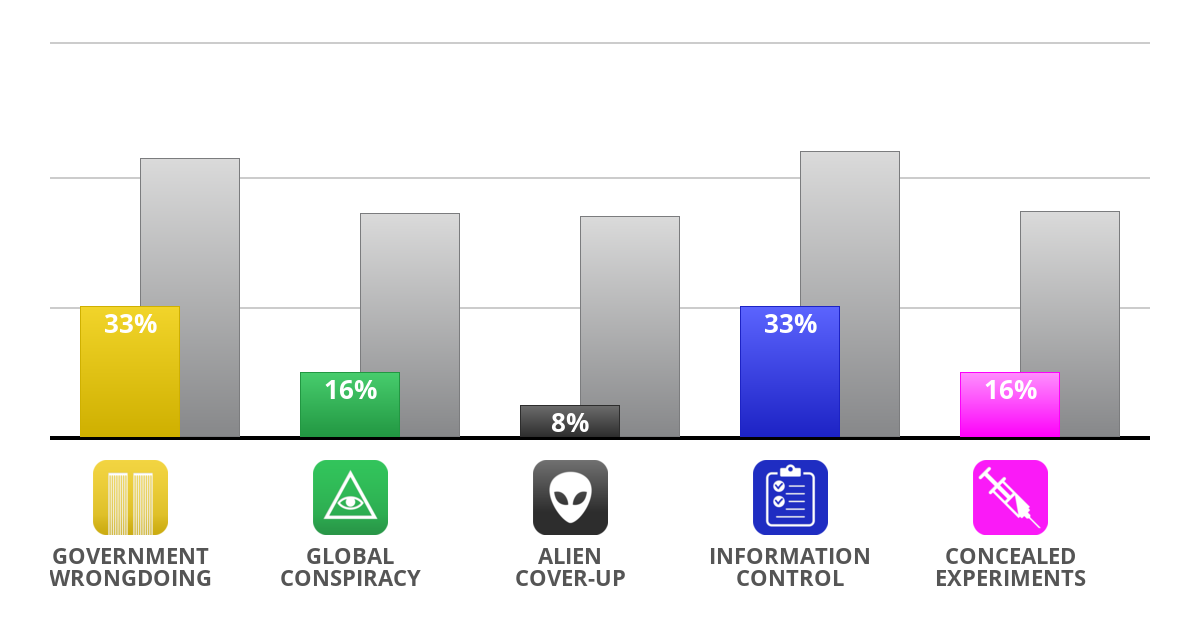 You are pretty low on the conspiracy theory scale, especially for the alien score.
I go back and forth on extraterrestrials. It could very well be true but, probably not likely. I gave it a thumbs down.
My results, 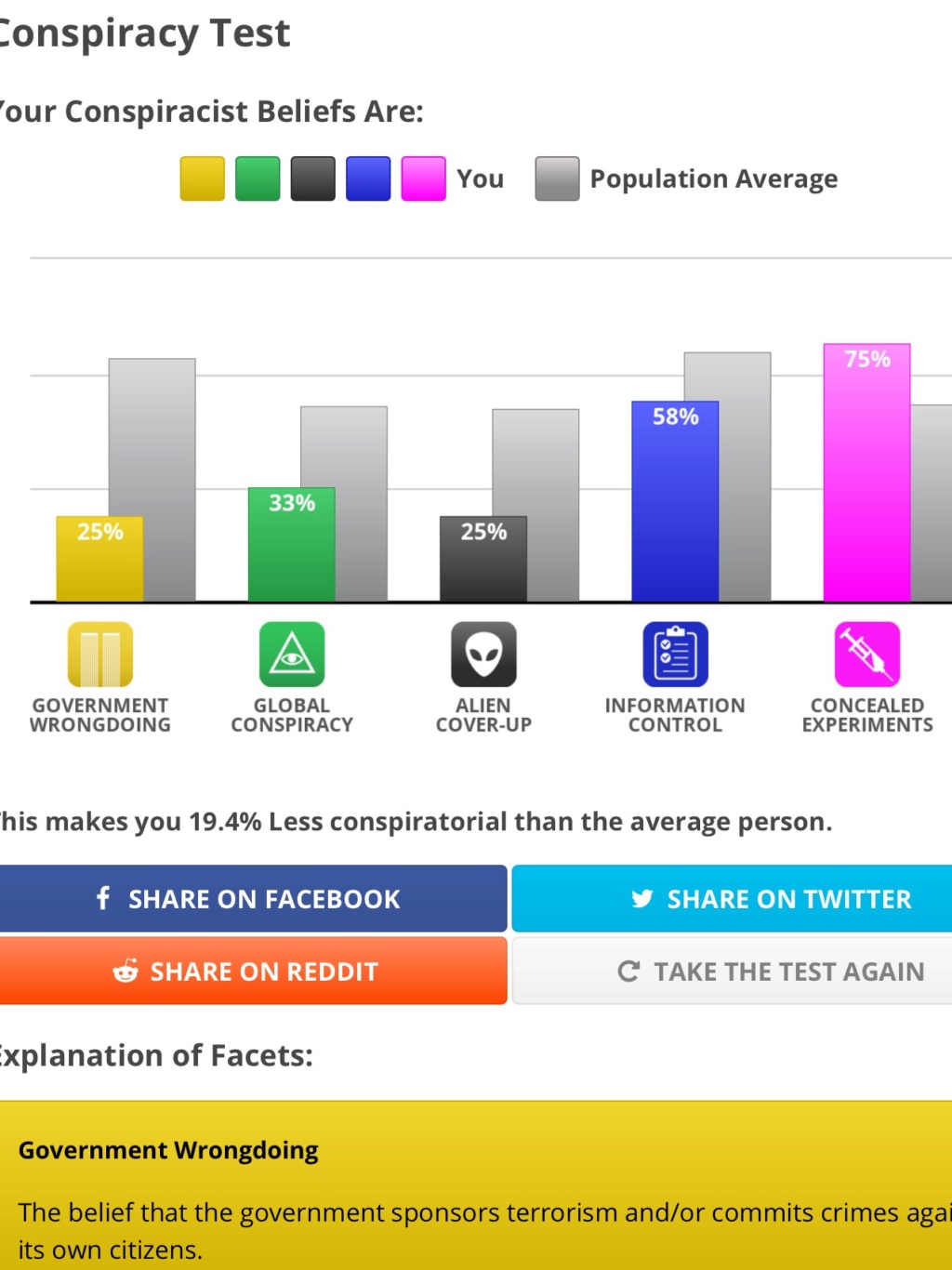 It seems that I am not quiet so trusting, of the powers that may be.

I'll take this test. More gaslighting by the establishment when it comes to "conspiracy theories." There is no such things as "conspiracy" theories, they say, even as they lie and steal and lie about lying and stealing.

They also came up with the term to delegitimatize our speculation about their lies. No joke, it was coined by the CIA.

As expected, everything but aliens: 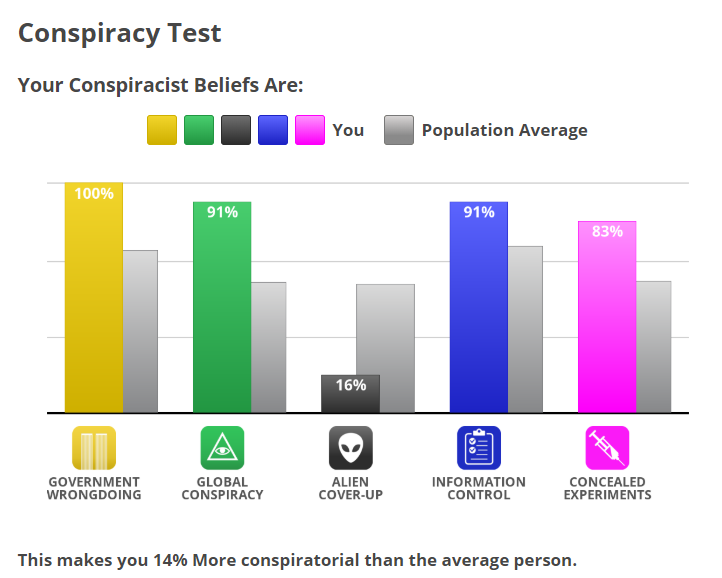