Which distribution do you think is best (ignoring practicalities) ?

The figures for USA and GB are not completely up-to-date but will not have changed much. 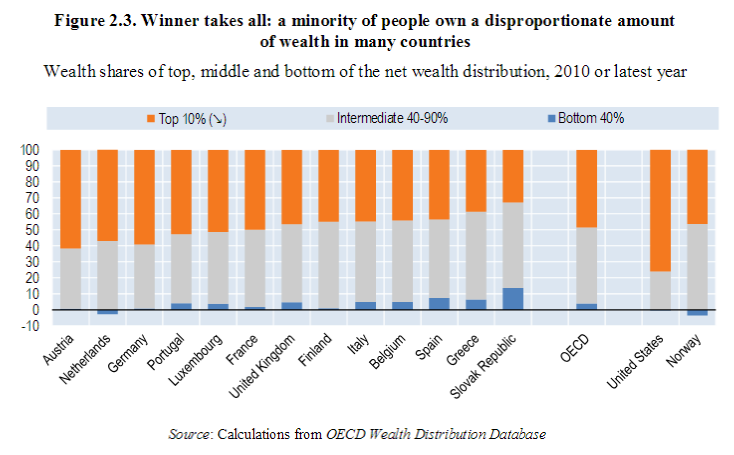 Some historical perspective on Great Britain:

I've found a series of data on Wikipedia Commons which shows greater bottom percentages for the USA and Britain. I'm compiling a table of various counties for comparison, including average wealth per adult.

Here it is. These are the main wealthy countries of the West, plus Israel and Japan. I've ordered them by relative poverty (RP) to see if anything stands out. RP is usually defined as having less than about half the median income in a certain country (so it's not strictly a measure of wealth). 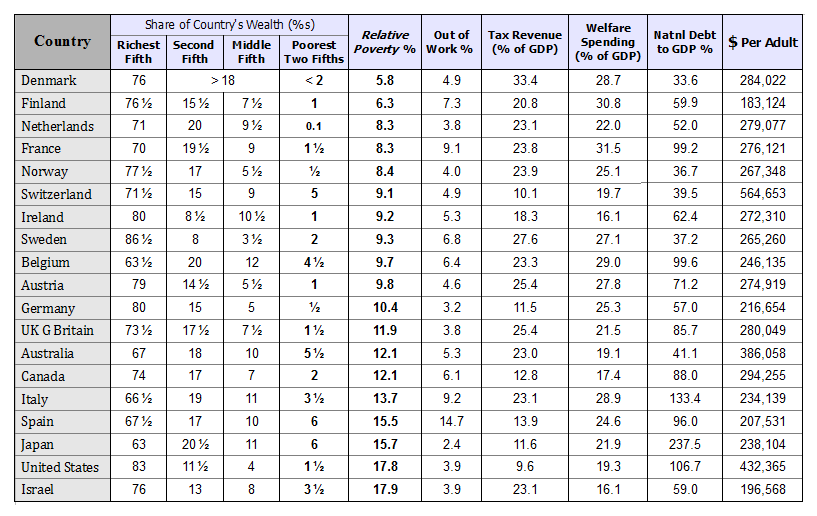 The most obvious thing is that the countries with the lowest RP are acheiving it without taking lots of wealth from the richest 5th or even the medium wealthy (not sure about Denmark there because there's less detailed info.), so it's ridiculous to call this pattern 'communism' as I've seen people doing.

But it's hard to see how those countries at the top are doing it. The Netherlands and Great Britain have similar levels of taxation, welfare spending and unemployment but the Netherlands has almost two-thirds the RP of Britain. Japan looks puzzling as well - the poorest have a big chunk of wealth compared to those in other countries and the lowest unemployment but its RP is one of the highest.

There's a theory that the Nordic countries have a stronger tradition of co-operation because, historically, they had harsher living conditions, though Sweden's current statistics are not as impressive as its reputation might lead you to guess.

So there are three types of poverty:

But does relative poverty matter? Some think it does . . .

In New Zealand, as in most developed countries, poverty is measured relative to 60% of the weekly median income. The question remains: why measuring relative poverty matters when it does not necessarily relate to hardship the way absolute poverty does.

British social epidemiologist, Richard Wilkinson, writes: “As we looked at the data, it became clear that, as well as health and violence, almost all the problems that are more common at the bottom of the social ladder are more common in more unequal societies”.

Wilkinson’s data analysis showed that regardless of how rich a country is, more unequal societies produce lower scores across all important social indexes such as: life expectancy, children wellbeing, obesity, mental illnesses (including drug and alcohol addiction), involvement in community life, levels of trust (believing that most people can be trusted), imprisonment (proportion of population in prison), teenage births, homicide, child mortality rates, and social mobility.

The interesting finding is that, in rich market driven countries, there is no correlation between GDP per capita and any of the factors above. It appears that, general social dysfunction is closely linked with inequality within the society; and it is not just the poor that are affected by it.

At each level in social hierarchy, from education to general health, there seem to be benefits in living in a more equal society. But why is that? Wilkinson believes that the reason lies in the psychosocial effects of inequality. Feelings of superiority and inferiority, dominance and subordination, valued and devalued, respected and disrespected are all closely linked with our social status and where we perceive ourselves in relation to others . . .

Neoliberal values have manufactured a false paradigm that links material possession and wealth to higher social status. Mass tagging of fences, acts of mindless vandalism, violence and, many other anti-social behaviour, are all expressions of social ills that are rooted in inequality.

As we looked at the data, it became clear that, as well as health and violence, almost all the problems that are more common at the bottom of the social ladder are more common in more unequal societies – including mental illness, drug addiction, obesity, loss of community life, imprisonment, unequal opportunities and poorer wellbeing for children. The effects of inequality are not confined to the poor. A growing body of research shows that inequality damages the social fabric of the whole society. When he found how far up the income scale the health effects of inequality went, Harvard professor Ichiro Kawachi, one of the foremost researchers in this field, described inequality as a social pollutant. The health and social problems we looked at are between twice and 10 times as common in more unequal societies. The differences are so large because inequality affects such a large proportion of the population . . .

US data also show that narcissism increased in line with inequality. The economic effects of inequality have also gained more attention. Research has shown that greater inequality leads to shorter spells of economic expansion and more frequent and severe boom-and-bust cycles that make economies more vulnerable to crisis. The International Monetary Fund suggests that reducing inequality and bolstering longer-term economic growth may be "two sides of the same coin". And development experts point out how inequality compromises poverty reduction.

Politicians must recognise that reducing inequality is about improving the psychosocial wellbeing of the whole society.