Anglo-Saxon tradition dictated that at the beginning of each year, the lord of the manor would greet the assembled multitude with the toast waes hael, meaning “be well” or “be in good health”, to which his followers would reply drink hael, or “drink well”, and so the New Year celebrations would start with a glass or two, or perhaps even a drop more! It is likely that such celebrations were being enjoyed many years before Christianity began to spread throughout Britain from around 600 onwards.

Depending upon the area of the country where you lived, the wassail drink itself would generally consist of a warmed ale, wine or cider, blended with spices, honey and perhaps an egg or two, all served in one huge bowl and passed from one person to the next with the traditional “wassail” greeting.

The Wassailing celebrations generally take place on the Twelfth Night, 5th January, however the more traditional still insist in celebrating it on ‘Old Twelvey’, or the 17th January, the correct date; that is before the introduction of the Gregorian calendar messed things up in 1752.

There are two distinct variations of wassailing. One involves groups of merrymakers going from one house to another, wassail bowl in hand, singing traditional songs and generally spreading fun and good wishes. The other form of wassailing is generally practiced in the countryside, particularly in fruit growing regions, where it is the trees that are blessed. The practice of house-wassailing continued in England throughout the Middle Ages, adapting as a way by which the feudal lord of the manor could demonstrate charitable seasonal goodwill to those who served him, by giving money and food in exchange for the wassailers blessing and songs;

“Love and joy come to you, and to you your wassail to;
and God bless you and send you a happy New Year.”

The house-wassailing tradition has evolved into what we now recognise as carolling, where groups of people go from door-to-door singing Christmas carols. Some aspects of the original practise however can still be detected in the words of these carols; listen carefully as the wassailers demands begin, “now give us some figgy pudding”, and then as those demands turn to threats “and we won’t go until we’ve got some”. The wassailing, or blessing of the fruit trees, involves drinking and singing to the health of the trees in the hope that they will provide a bountiful harvest in the autumn. This ancient custom is still practised across the country today, and is particularly popular in the cider-producing areas of England, such as Somerset, Devon, Herefordshire, Kent and Sussex.

The celebrations vary from region to region, but generally involve a wassail King and Queen leading the assembled group of revellers, comprising the farmers, farm workers and general villagers, in a noisy procession from one orchard to the next. In each orchard the wassailers gather round the biggest and best tree, and as a gift to the tree spirits, the Queen places a piece of wassail soaked toast into its branches, accompanied by songs such as;

The wassailers then move on to the next orchard; singing, shouting, banging pots and pans, and even firing shotguns, generally making as much noise as possible in order to both waken the sleeping tree spirits, and also to frighten off any evil demons that may be lurking in the branches.

As mentioned previously, the custom of apple tree wassailing is celebrated across the country, on either the new or old Twelfth Night. Other ancient wassailing traditions are also practiced each year in London, where the Bankside Mummers and the Holly Man will ‘bring in the green’ and waes hael the people and the River Thames.

Morris dancers have defended blacking their faces to take part in a wassailing ceremony as they insist that the practice is part of their tradition and is not racist.

Hundreds of people gathered in Westons Cider Mill in Much Marcle in Herefordshire this weekend to take part in the ancient tradition which is thought to bring luck to the apple orchards and ward off evil spirits. The Silurian Border Morrismen entertained the crowds with dancing and music and controversially some wore a full face of black paint as part of the ceremony. But the troupe has defended themselves against criticism, writing on their website:  “Despite modern attempts to imply otherwise, the blackened face has no known racist origins.” 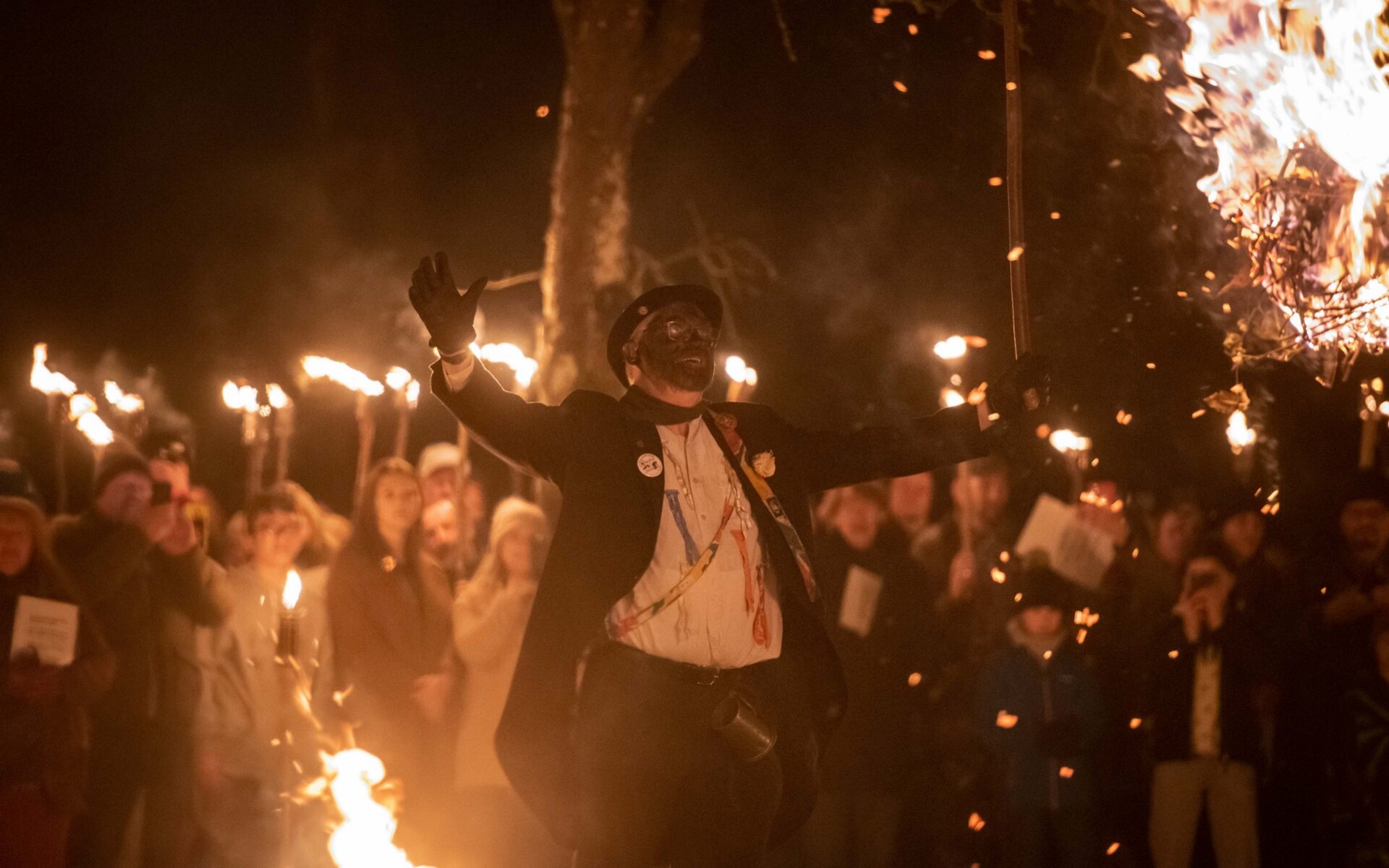 The wassail ceremony has its roots in paganism, the word coming from the Old English greeting wæs hæl, meaning “Be healthy” or “Your good health”. The ceremony involves placing a cider-soaked piece of cake on the branches of an apple tree, pouring cider over the roots, dancing and singing the Wassail Song.

Accounts of the wassailing of fruit trees were recorded in St Albans in 1486 and Kent in 1586, while the 17th-century diarist John Aubrey wrote of the practice of toast being placed in trees. Professional wassailers travelled from farm to farm and were usually paid in food and cider. But there has been growing controversy over the black face paint which Morris dancers have been wearing since the 16th Century.

The Silurian Border Morrismen say that the “true origins of the blackened face are lost in the mists of time, but are widely believed to be simply a form of disguise, possibly to overcome the oppressive anti-begging laws of the 17th century, and the timeless embarrassment of being a morris man.”

Despite arguments that the practice is central to the ethos and tradition of Morris dancing, it has widely been condemned in recent years and compared to the offensive blackface minstrels. Shrewsbury Folk Festival, one of the largest in the UK, has banned dancers from performing with black paint on their face because of complaints of racism.

Oh, so that's Wassaling? I had no idea. I would hear it in a song, "Here we come a'wassaling among the leaves of green!"

And I would think, what the heck is a wassal? lol

I think most Americans have forgotten about it. Good to know. And it's obviously not racist.