Dracula could have been inspired by an Irish legend

Tales of vampires and other similar blood-sucking creatures have been told in various societies across the world. The most famous of these tales is the story of Dracula, written by Bram Stoker, and published in 1897. . . It has been popularly speculated that the character of Dracula is based on Vlad the Impaler, the 15th century Prince of Wallachia. Nevertheless, there are those who believe that it was Irish folklore rather than Romanian history that inspired Stoker’s Dracula.

[Stoker] had never travelled further east than Vienna, and is said to have never actually visited Romania. In 1998 professor Elizabeth Miller published an essay in which she maintained that Stoker’s research notes for Dracula do not indicate that he had detailed biographical knowledge of Vlad III . . . Just over a decade ago, Bob Curran, a lecturer in Celtic History and Folklore at the University of Ulster, Coleraine, published a paper in the peer-reviewed journal History Ireland in which he hypothesized that Stoker based his novel on the legendary story of Abhartach, a 5th century chieftain known for his bloodsucking habits.

In the early 17 th century, Dr Geoffrey Keating published the first written record of Abhartach in his work Foras Feasa ar Eireann (‘A General History of Ireland’). Although today viewed as a folk legend, Keating referred to Abhartach as a real historical figure. 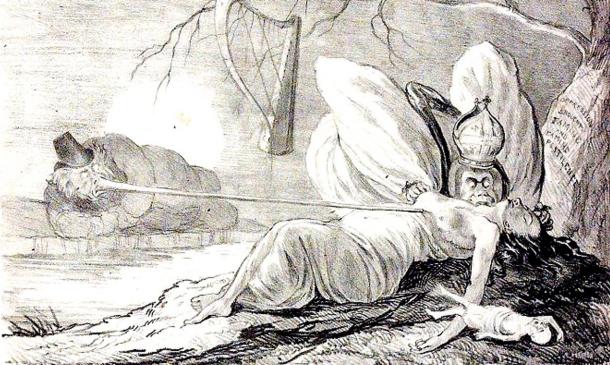 llustration from The Natural History of Two Species of Irish Vampire

According to his account, Abhartach was a brutal 5th century warlord, who ruled over a small kingdom in an area bordered by what is now the town of Garvagh in Ireland. Abhartach was greatly feared by his people, who believed he had dark and magical powers. The townsfolk wanted to rid themselves of this troublesome king so they called upon a chieftain from a neighboring kingdom, named Cathain, to kill him. Cathain succeeded in killing Abhartach and buried him standing up, as befitted a Celtic chieftain.  However, the story goes that Abhartach rose from the grave and demanded a bowl of blood from the wrists of his subjects to sustain his energy. Cathain returned to kill Abhartach a second time, but again he rose from the dead, demanding the blood of the living.

Cathain sought the advice of a Christian saint who informed him that Abhartach was a marbh bheo (walking dead) and must be killed with a sword made of yew wood before being buried upside down with a great stone placed upon his body to weigh him down, preventing him from rising again. Cathain followed this advice and today, in the town of Slaghtaverty, a capstone can be seen at the site where Abhartach was supposedly buried.

The story of Abhartach was retold centuries later in Patrick Weston Joyce’s The Origin and History of Irish Names of Places, 12 years before Bram Stoker wrote his famous novel Dracula.  Interestingly, the Celtic word ‘dreach-fhuola’ means tainted blood, and some maintain that it was this word from which Stoker developed the name of his central character.

Here is an interesting website that delves into the practices of modern day, energetic vampirism.
This is a real thing, some people seem to be more attuned to of this phenomenon than others. Everyone should be aware!
https://drlwilson.com/Articles/VAMPIRISM.htm
The funny thing about vampires is that they are not always, as they appear!

^ I've read before about something similar, but is was called psychic vampirism.

I've always thought they were boring and lame. I remember when I was younger, it was all about Anne Rice. Meh.