Joseph Ignace-Guillotin was a well-known physician in 18th century France. A member of the French National Assembly, he was a philanthropist and a popular advocate of a one man, one vote electoral system. He was not a supporter of the death penalty, but proposed that the method should be as humane as possible and applicable to all citizens. However, he never expected that the killing machine would be named after him and always disliked this association.

Until the French Revolution, the nobility were executed by a sword blow, while commoners went to the gallows or the breaking wheel.

The guillotine was the brainchild of Tobias Schmidt, a German engineer, and Antoine Louis to execute people as quickly, efficiently and painlessly as possible. In one year during the Reign of Terror phase of the French Revolution, 17,000 people were guillotined. 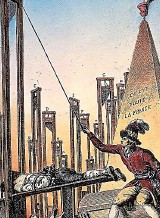 Until the death penalty was abolished in 1981, the guillotine was the only legal method of execution in France, apart from military firing squads. The last person to be guillotined, in 1977, was Tunisian immigrant Hamida Djandoubi, who had tortured and murdered his girlfriend.