While there is limited surviving documentation of the martial arts of classical antiquity (such as Greek wrestling or gladiatorial combat), surviving dedicated technical treatises or martial arts manuals date to the Late Middle Ages and the early modern period. For this reason, the focus of HEMA is de facto on the period of the half-millennium of ca. 1300 to 1800, with a German and an Italian school flowering in the Late Middle Ages and the Renaissance (14th to 16th centuries), followed by Spanish, French, English and Scottish schools of fencing in the modern period (17th and 18th centuries). Arts of the 19th century such as classical fencing, and even early hybrid styles such as Bartitsu may also be included in the term HEMA in a wider sense, as may traditional or folkloristic styles attested in the 19th and early 20th centuries, including forms of folk wrestling and traditional stick-fighting methods.

. . . Attempts at reconstructing the discontinued traditions of European systems of combat began in the late 19th century, with a revival of interest in the Middle Ages. The movement was led in England by the soldier, writer, antiquarian and swordsman, Alfred Hutton. Hutton learned fencing at the school founded by Domenico Angelo. In 1862, he organized in his regiment stationed in India the Cameron Fencing Club, for which he prepared his first work, a 12-page booklet entitled Swordsmanship. After returning from India in 1865, Hutton focused on the study and revival of older fencing systems and schools. He began tutoring groups of students in the art of 'ancient swordplay' at a club attached to the London Rifle Brigade School of Arms in the 1880s.

. . . Similar work, although more academic than practical in nature, occurred in other European countries . . . Throughout the 20th century a small number of researchers, principally academics with access to some of the sources, continued exploring the field of historical European martial arts from a largely academic perspective . . . In the 1980s and 1990s, Patri J. Pugliese began making photocopies of historical treatises available to interested parties, greatly spurring on research. 1994 saw the rise of the Hammerterz Forum, a publication devoted entirely to the history of swordsmanship. During the late 1990s, translations and interpretations of historical sources began appearing in print as well as online.

Since the 1990s, there have emerged flourishing Historical European Martial Arts communities in Europe, North America, Australia and the wider English-speaking world. These groups are engaged in attempting to reconstruct Historical European Martial Arts using various training methods. Although the focus generally is on the martial arts of Medieval and Renaissance masters, nineteenth and early twentieth century martial arts teachers are also studied and their systems are reconstructed . . .

In 2001, the Historical European Martial Arts Coalition (HEMAC) was created to act as an umbrella organization for groups in Europe . . . In 2003, the Australian Historical Swordplay Federation became the umbrella organization for groups in Australia. In 2010, several dozen HEMA schools and clubs from around the world united under the umbrella of the HEMA Alliance, a US-based martial arts federation dedicated to developing and sharing the Historical European Martial Arts and assisting HEMA schools and instructors with such things as instructor certification, insurance, and equipment development.

. . . The longsword is characterised not so much by a longer blade, but by a longer grip, which indicates a weapon designed for two-handed use. Swords with exceptionally long hilts are found throughout the High Middle Ages, but these remain rare, and are not representative of an identifiable trend before the late 13th or early 14th century.

The longsword as a late medieval type of sword emerges in the 14th century, as a military steel weapon of the earlier phase of the Hundred Years' War. It remains identifiable as a type during the period of about 1350 to 1550. It remained in use as a weapon of war intended for wielders wearing full plate armour either on foot or on horseback, throughout the late medieval period. From the late 15th century, however, it is also attested as being worn and used by unarmoured soldiers or mercenaries." (Wikipedia)

"The small sword (or court sword, l’épée courte) is a weapon that began to spread across Europe as early as the 1630s.  This weapon, effective in both attack and defense and designed for the thrust reached the height of its popularity in the late 17th-early 18th century; particularly in England and France.  Due to the small sword’s practicality, lithe & lethality, it became the weapon used to dissolve disputes. Because the small sword required fencing skill to handle, and due to its piercing nature, the small sword duel was deemed “more civilized” than weapons concentrated on slashing and hacking.

. . . One of the most realistic scenes involving the small sword can be seen in the first fight in the movie, The Duellists":

I'm glad that some people are trying to revive this. As much as I appreciate Oriental Martial Arts, I really like that we have our own traditions and they should be preserved.

Sword against spear (action begins at 1:42):

This is amazing. Thanks.

Now for a Christmas treat

The climactic scene from the film By the Sword:

The actor in the grey shirt is Eric Roberts, brother of the famous Julia Roberts.

The use of mail as battlefield armour was common during the Iron Age and the Middle Ages, becoming less common over the course of the 16th and 17th centuries. It is believed that the Roman Republic first came into contact with mail fighting the Gauls in Cisalpine Gaul, now Northern Italy, but a different pattern of mail was already in use among the Etruscans. The Roman army adopted the technology for their troops in the form of the lorica hamata [below] which was used as a primary form of armour through the Imperial period. 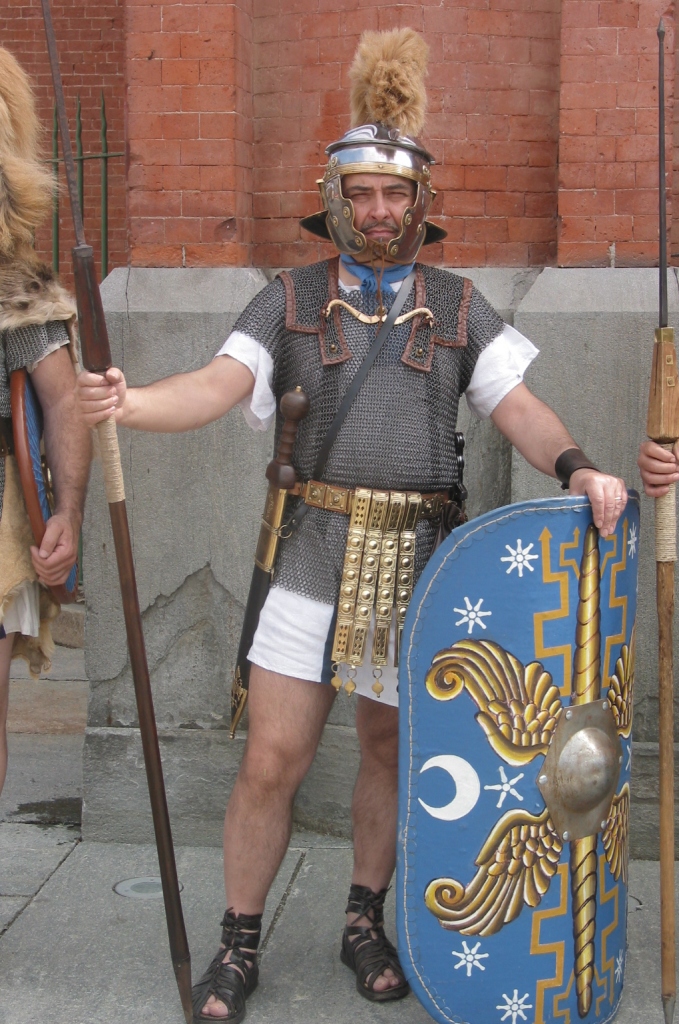 After the fall of the Western Empire, much of the infrastructure needed to create plate armour diminished. Eventually the word "mail" came to be synonymous with armour. It was typically an extremely prized commodity, as it was expensive and time-consuming to produce and could mean the difference between life and death in a battle.

Apparently, a common mistaken belief now is that mail was not very effective; this arises from testing inferior replicas which are made with the ring ends simply closed together (butted) rather than being riveted or welded.

A nicely informative short video about the distinctive (that's the word I was looking for) bacinet helmet:

@OsricPearl wrote:You never know. Knowing how to shoot a bow or strike with a spear may come in handy one day. ;p

I think anyone who has shown him or her self to be a civilised person by the age of 30 should be allowed to carry a small sword for self defence. Or maybe a poleaxe:


"Come at me with that zombie knife, you scoundrel!"

I doubt but who knows.

But contrary to the stereotype that only americans civils have guns, in Europe we have also tons of weapns. It's mainly hunting guns. So if shit really tooks place I hope I will get something more efficient than a bow^^

But fighting skill is always usefull, it prepares yourself psychologicaly.


Does some people here are involve in this?

I doubt but who knows.

But contrary to the stereotype that only americans civils have guns, in Europe we have also tons of weapns. It's mainly hunting guns. So if shit really tooks place I hope I will get something more efficient than a bow^^

But fighting skill is always usefull, it prepares yourself psychologicaly.

Does some people here are involve in this?

I've done a bit of fencing and archery and I did kung fu for a while but nothing recently. As you say, the real benefit of combat sports (apart from enjoyment) is psychological - they reduce the fear of being hurt and increase self-confidence. Confidence counts for a lot. I think everyone remembers the small aggressive boy at school beating up the big tall boy who didn't have the will to fight.

Three videos dispelling (mostly) the myth that it was difficult to move in medieval armour:

The strength and agility of these men is quite impressive, especially the older gentleman swimming in the armor.
The children seem to be very entertained by his athletic show.